Nice playground - shame about the litter and graffiti

I took one of the kids to Livvi's Place in Timbrell Park this morning (you'll have to Google it as my browser is not letting me insert links today). It's a great playground, completely refurbished in November last year. It's also popular.
Unfortunately, some of those that visit the playground don't care about other visitors. There was a Jim Beam can and beer bottle at the entrance when we walked in, and as I found out soon after, a smashed bottle in the BBQ area - a girl of 2 or 3 sliced her foot open on some glass when we were playing in the sand pit. That was just the tip of the iceberg - the entire area around the playground was covered with rubbish. 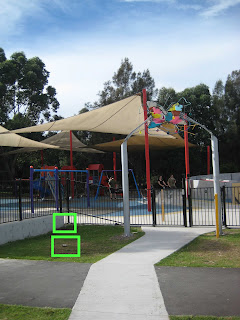 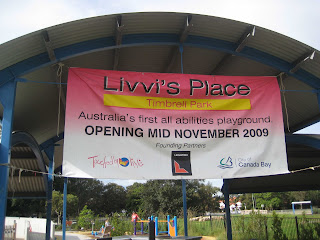 A Council worker showed up just after we arrived and spent about an hour walking around picking up rubbish and putting things back where they should be. I hate to think what it costs the ratepayers to supply a worker and a vehicle on a Saturday to visit our local parks to clean up after lazy people who can't be bothered carrying their rubbish to the nearby bins. I'm glad the Council is doing it, but I wish they didn't have to. Unfortunately, he didn't have time to do the area outside the playground - that would have kept a crew busy for the rest of the day.
And then there are those that leave their mark all over the playground equipment and BBQ facilities. There are plenty of partly visible tags on the playground equipment, showing where older tags have been not quite cleaned off, so I take it that the place has been vandalised a number of times since the re-opening in November. 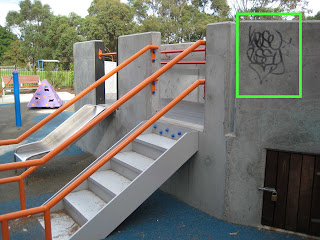 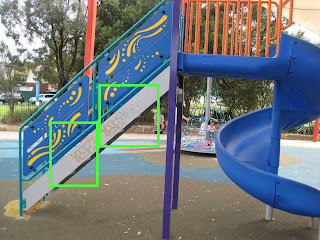 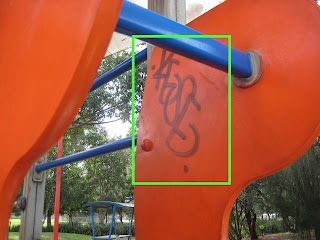 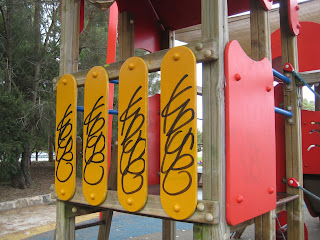 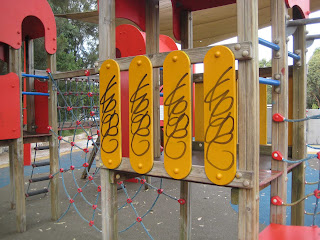 Posted by Not Somebody Else's Problem at 1:58 PM 3 comments: Links to this post

More RTA traffic light cabinet murals around Balmain/Lilyfield. I like this one the best so far. 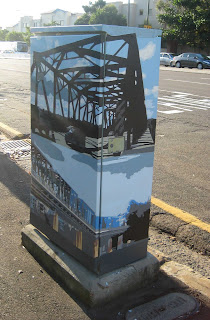 Not my thing, but better than being smothered in tags. 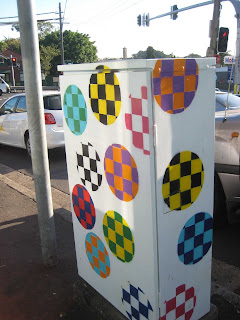 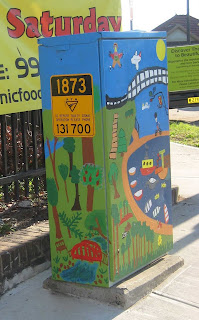 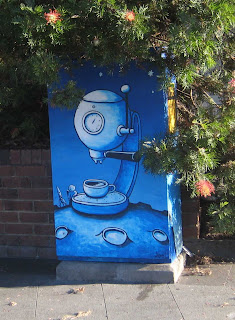 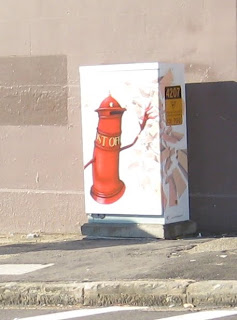 Can't wait until our council gets a similar program up and running!
Posted by Not Somebody Else's Problem at 5:20 PM No comments: Links to this post

Monday - a public toilet in Ashfield. (There was no graffiti here on Friday). 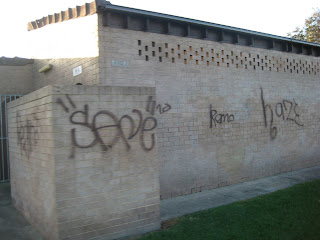 Tuesday - gone. Not the greatest of cleanup jobs, but quick work nonetheless. 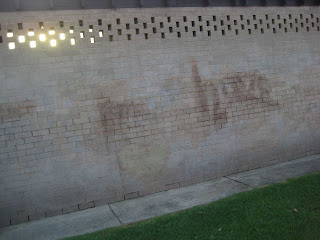 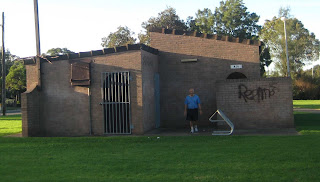 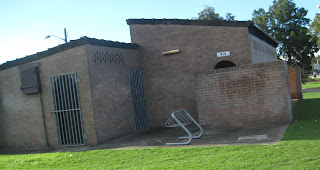 Someone is on the ball. Nothing to do with me.
Posted by Not Somebody Else's Problem at 10:14 PM No comments: Links to this post

I have just the solution for that

I found this mural today on a bit of public property. This particular spot has been hit a few times before, and each time, the RTA has painted over it fairly quickly. I went past here last week and the wall was clean, so it's quite new. Hopefully, the RTA will have the painters round soon to clean it up.

The RTA could try a bit of lateral thinking and put up a mural here. It's a nice spot, and a mural would do wonders to improve a slab of boring, grey concrete. Something to think about.
Posted by Not Somebody Else's Problem at 9:40 PM No comments: Links to this post

Wheelie sensible use of ratepayers cash

Up in Umina, the youngsters are hopping in wheelie bins, rolling down hills, crashing into trees and killing themselves. In Ashfield, it's pretty flat, so they have to satisfy themselves with throwing wheelie bins into canals. Spotted two floating by today. 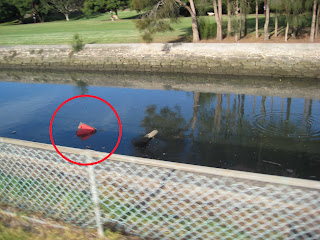 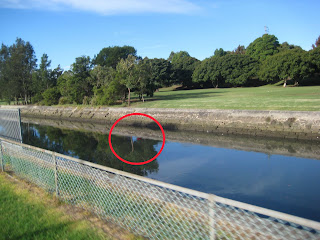 Dropped Ashfield Council an email tonight to let them know where they can go fishing for their bins.
Posted by Not Somebody Else's Problem at 9:29 PM No comments: Links to this post

A tale of two councils

Leichhardt Council has a program where they commission artists to paint the RTA cabinets at traffic lights. They've been slogging their way through the long list of traffic lights in the council area, and the results vary from fairly ordinary to pretty amazing (depending on how you feel about art).
I've asked Canada Bay Council to see if they can start a similar program next financial year. The difference between the two council areas is pretty stark, as you can see below. 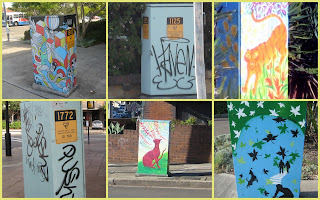 Posted by Not Somebody Else's Problem at 7:26 PM No comments: Links to this post

One fine Sunday out west

90 minutes on the road this morning. Reported 3 abandoned cars, two vandalised post offices, six graffiti'd Energy Australia kiosks, one council park strewn with rubbish from end to end, one war memorial with graffiti on it, one bridge and one grandstand with graffiti and two RTA utility boxes. Phew. 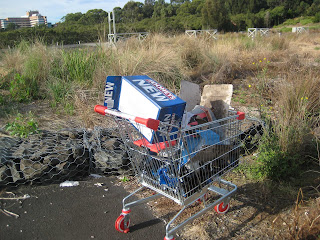