The changing face of graffiti

Here's a bit of old school graffiti. This is the sort of stuff that I have always thought of as graffiti - that is, spray-can based. There's nothing artistic in any of this, even though it was all done indoors and out of sight, allowing plenty of time to create a masterpiece if the vandal had any talent. 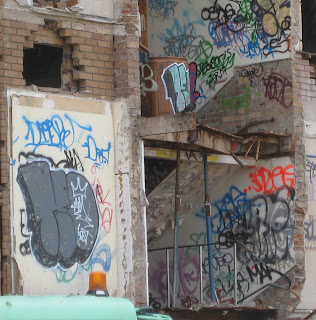 This is what it has evolved into - the spray cans in our area seem to have disappeared, and have been replaced with fat textas. Gone are the bright colours - it seems most vandals can only get their hands on black ink these days. 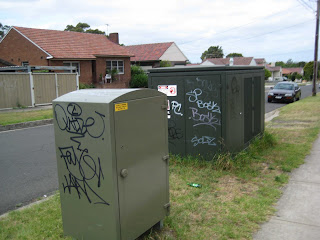 I don't know what is driving this - whether it is the tougher retailing laws, or tougher laws regarding juveniles caught with cans, or Police stopping and searching likely teenagers. Whatever the cause, I'm not seeing anything like the amount of spray paint that I saw a year ago. 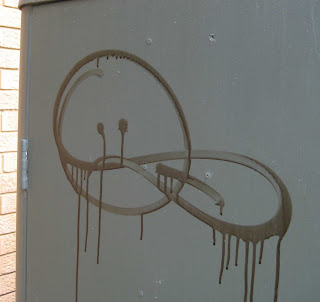 Textas are useless on a rough surface, so the spray paint drought is restricting vandals to a small number of smooth surfaces. Can't complain about that.
Posted by Not Somebody Else's Problem at 8:31 PM 1 comment: Links to this post

There goes the teenage drop-in centre

We don't actually seem to have an official teenage drop in centre around these parts. So as with all things, if one doesn't exist, fertile minds will create one. 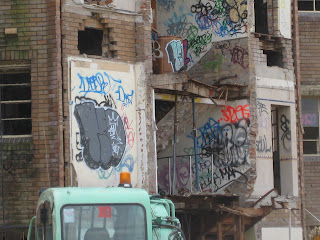 This particular building has been abandoned and empty for as long as I have lived in the area - but just recently, the developers have moved in and demolition has commenced. 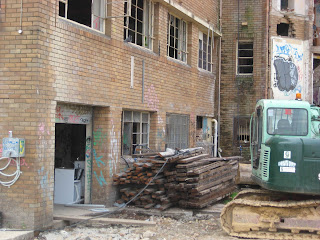 The local vandals weren't deterred by security fences or boarded up doors. As you can see, they've been plenty busy on redecorating the interior. 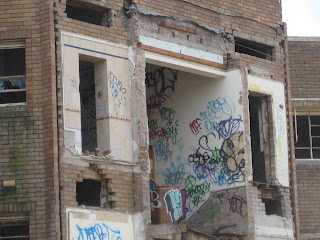 Most of the windows have been broken, and there is evidence in several locations of fires having been lit inside. 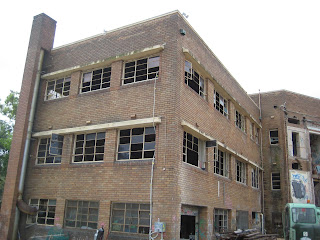 In a year or two, all of this will probably be replaced with modern apartments like those in the background. 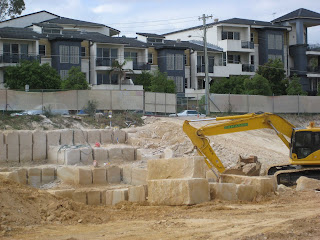 I was wondering how the stone blocks were being removed - with a very big saw. 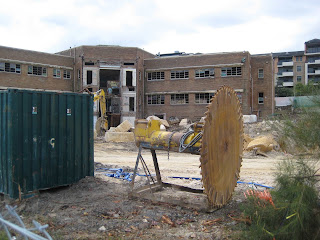 Right now, the only residents at this site are a couple of ducks. Posted by Not Somebody Else's Problem at 8:08 PM 2 comments: Links to this post

Four for the tip

Nothing to do with me - I found this abandoned car this way. The Council slapped a sticker on it recently, so it is close to being towed to the tip. 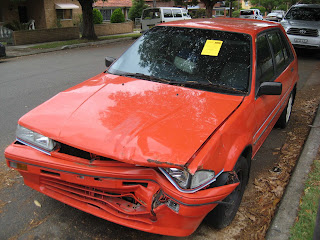 Rego expired a few months ago. Although it doesn't show in this photo, the car is well covered in leaf litter and looks like it has not moved for months. 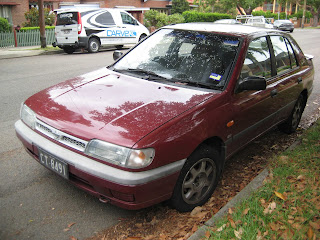 Rego expired a few months ago. The woman who owns the car saw me photographing it and asked if I wanted to buy it! No, I just want it off the street. 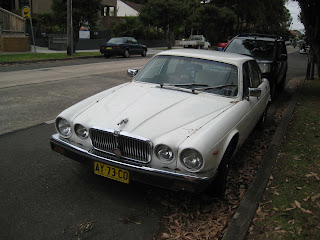 Rego also expired some 6 months ago. Again, the leaf litter on this one was pretty thick, especially on the windows, indicating it has not moved in months. 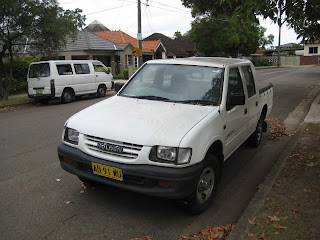 These three cars were all within a few hundred metres of each other in two streets. I found all four during a short walk around an unfamiliar suburb.
Posted by Not Somebody Else's Problem at 6:53 PM 1 comment: Links to this post

As the Democrats used to say, you need to keep the bastards honest. Every time you log a graffiti incident on the Energy Australia website, they should reply with an email giving you the job number for cleaning it up. Here's a sample: 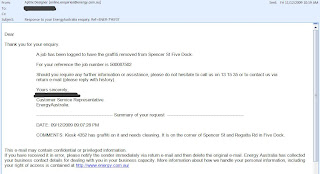 A month ago, I started to wonder whether all my jobs were being logged properly, as I was noticing that some kiosks were cleaned up pretty quickly, whilst others never seemed to get done. I therefor started tracking everything I logged in a spreadsheet.

What I've found is that most of the incidents have been logged by Energy Australia within 5 days, and generally cleaned up about 2 weeks later. I haven't been back to every site to check whether they've been cleaned or not, but as I go past them from time to time, I have a look at how they are going.
Interestingly, I logged 5 incidents this week. I got two emails back yesterday - one for an incident logged on the 4th, and another logged last night. However, the three in the middle have gone walkabout. I really wonder whether their system is eating some of the incidents, or whether they are simply failing to log them.
If I don't get a response within a few weeks, I contact Energy Australia and follow up over the phone. I shouldn't need to be doing this, but unless I am absolutely certain that they are on top of things, I'm going to check and check and check again.
The good news is that the cleaning efforts of Energy Australia appear to be bearing fruit. When I first started doing this a year ago, all their substations and kiosks were a bloody disaster - coated in graffiti half an inch thick. Now, most of them are clean and green. Yes, graffiti does creep back, but in nothing like the quantities they used to attract, and the attacks are much less frequent.
Posted by Not Somebody Else's Problem at 9:25 AM 1 comment: Links to this post

Police + people who do something = action

Tonight, I attended the quarterly meeting of our local CSPC - Community Safety Precinct Committee. It's where the Police, local councils and residents get together to discuss issues of concern and how to deal with them. I think this is the 4th meeting of our CSPC, and in my opinion, it's been very productive.
We saw attendance by the public go up by 100% this week - Councillor Helen McCaffrey convinced a fellow Rotarian to attend, so there was Ray and me. It was nice to not be the sole member of the Great Unwashed for once.
I get a lot of value out of these meetings - which only take an hour or so - because you find out a lot of stuff that never makes it into the paper (presumably because it is considered to be too boring or trivial to capture the attention of most readers). I've also found that if you raise a problem, and it's viewed as being legitimate, then it will get attention from both the Police and Council. Things actually get done - it's not a talking shop. Well, actually we talk a lot, but it's useful and productive talk. Pity about the lack of biscuits this time though. I must remember to take a packet of chocolate ones next time.
I'm pleased to say that a few items that went on the table at the start of the year are now bearing fruit. The Police asked for some kit that would assist them in catching crooks, and Council approved funding for it last night. We also suggested that Council take a different approach to removing graffiti (ie, remove it and then tell the owner afterwards, rather than asking permission, providing a quote blah blah blah) and that has made a huge difference to graffiti removal.
The committee also had a look at what was happening in our local parks after dark, and as a result, the Police scheduled a lot more patrols through the problem areas. Arrests have been made and charges laid and as a result, the parks aren't getting torn up this year by people who lack the self control to have a good time without smashing up everything around them.
The meeting this evening was in Concord (it gets moved around Canada Bay each time to give local residents a chance to attend) and on the way home, I spotted three vandalised Energy Australia kiosks (which have all been reported). Just goes to show that if you take your eye off the ball for a few months, things can go to hell in a big hurry.
Posted by Not Somebody Else's Problem at 10:08 PM No comments: Links to this post

Soon to be scrap

Spotted this abandoned car about a week ago. Finally got around to reporting it today. The rego expired in early November, but it hasn't moved in months. Ta ta. 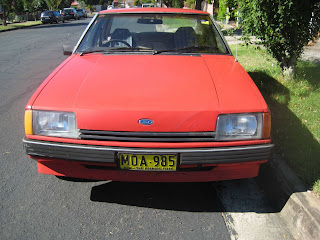 Is two weeks an adequate response?

I've been keeping a rough track of how Energy Australia has been going in regard to cleaning kiosks around the inner west. I started a spreadsheet back in November, and every time I report a vandalised kiosk, I keep track of when I reported it, the reference number, address and so on - and then note the date when it is cleaned.
Not long ago, it was taking Energy Australia nearly two weeks just to get around to logging my reports, and then a further two weeks to send someone out with a paintbrush to clean things up.
Now, they are logging the reports within 4 days, and cleanup seems to happen within 10 days in many cases, giving a 2 week turnaround time.
The problem with this is that I read an anecdote not long ago that said if you cleaned a site within 2 days, there was a 90% chance it would remain clean. If you took longer than two weeks, there was a 100% chance of repeat graffiti.
What I have noticed over the last year though is that although Energy Australia kiosks are still being hit, they are being hit much less often and the volume of graffiti is much lower. Cleaning seems to discourage a lot of vandals. Not all, but many. Which is better than nothing.
Posted by Not Somebody Else's Problem at 9:55 PM No comments: Links to this post