I just can't get over the fact that I keep finding abandoned cars scattered around our suburbs. I've really got an eye for spotting them - although it's easy when you know what you are looking for. Flat tyres are a good start. Weeds growing up around or under the car are another indicator. The easiest is when the leaves are falling - if a car is surrounded by leaves or flowers, and there are none underneath, then it's a sign that the car has not moved for a while. If there are leaves under the car, it means the car was not there when the leaves fell, and was later parked on top of them. Leaves rarely seem to blow under cars. Spider webs festooned all over the wing mirrors and wipers are also something to look for. 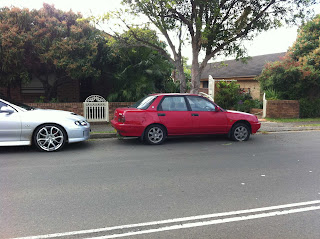 The registration on both these cars expired in March - 6 months ago. 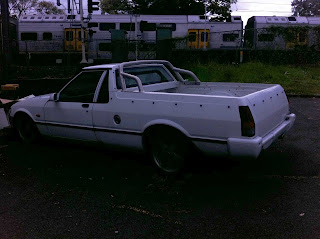 The ute is parked out the back of Concord West train station, and it's slowly filling up with rubbish - although some people can't be bothered tossing it in the back - they've just tossed it around the ute instead. The back of the station is already a bit of a mess - an abandoned ute accumulating rubbish doesn't exactly add to the ambience. 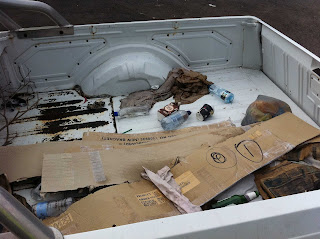 I've reported both to Canada Bay Council - I expect they'll be gone before long.
Posted by Not Somebody Else's Problem at 10:01 PM 1 comment: Links to this post