And that was just one weekend in January. There's been lots more since then.
Posted by Not Somebody Else's Problem at 10:05 AM 3 comments: Links to this post

I haven't posted much for a while because it's been a slow three months since my last post. There's been the odd abandoned car to report and a few bits of graffiti - but otherwise, I've had little to do. Which is great - that's just the way I like it. 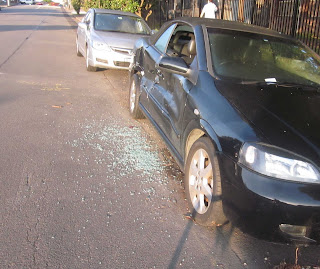 I went for a ride with BayBUG and our pack has to swerve around this patch of broken glass from a car crash. I reported that to Canada Bay Council, and it was gone a few days later. I found another patch of glass on the footpath around the Bay Run - also from a car crash - and Council cleaned that up pretty quickly. Cyclists are always complaining about broken glass on the road, but how many ever bother to report it? 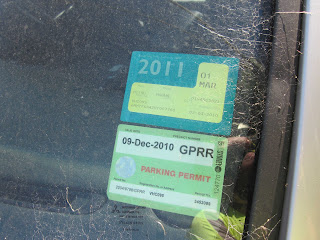 I found a few more abandoned cars in Concord, including one that had been out of rego for 7 months and had become a holiday home for hundreds of spiders. The car looked like a total wreck, even from a distance, but none of the people living in that street had bothered to do anything about it. 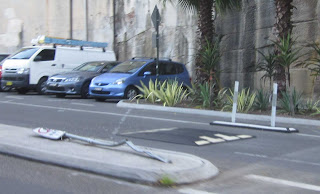 Straying further from home, I got Sydney City Council to repair these bike lane dividers. There are four sets of speed humps along this section of road, and all the dividers had been knocked over by drivers wanting to avoid driving over the speed humps (and slowing down a bit). It only took a few months of correspondence, but Council replaced them in the end. 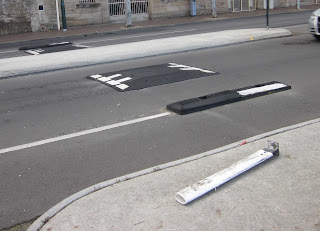 And there's graffiti - of which I've reported hardly any, as there hasn't been much to report. When I started reporting graffiti to Energy Australia back in 2009, it was normal to report 2 vandalised items per week. I've only reported two in the last 4 months - vandalism still occurs, but at nowhere like the rate it was happening 2-3 years ago. The deterrent effect of rapid and repeated removal seem to be working. 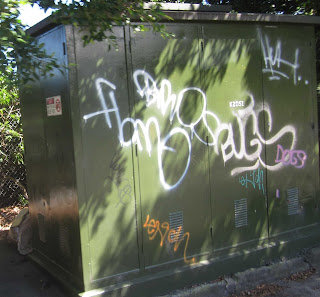 Posted by Not Somebody Else's Problem at 8:48 PM No comments: Links to this post