A wall over the period of less than one month. This was painted out around Christmas time by the RTA, who now regularly paint this without any prompting.

It doesn't take long, does it?
Posted by Not Somebody Else's Problem at 1:44 PM 3 comments:

Ask, and you shall recieve.

The RTA has painted over large slabs of graffiti along the CityWest link. They've also cleaned a number of traffic light cabinets in Drummoyne.

RailCorp have painted over bridge graffiti in Rhodes.

Sydney Water have cleaned up one of their pumping stations in Ryde.

Canada Bay Council have towed away a handful of abandoned cars and removed graffiti from some local playgrounds. Leichhardt council have also removed an abandoned car that I spotted recently on their patch.

Energy Australia have been busy cleaning their kiosks.

It's just a matter of telling them where the problem lies and asking them to fix it.
Posted by Not Somebody Else's Problem at 5:58 PM No comments:

What do hippies get up to?

I'll start on a lighter note for once - an amusing bit of graffiti under a road bridge in Rhodes. The caption says "Happy New Year (cause U no wat hippies get up 2)". It's nice to see a mildly amusing piece of graffiti once in a blue moon. 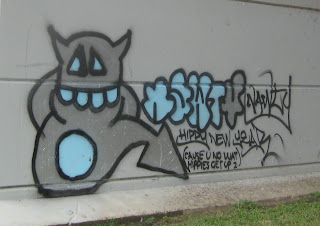 Unfortunately, the rest tends to be like this. "Cheers c*nts". 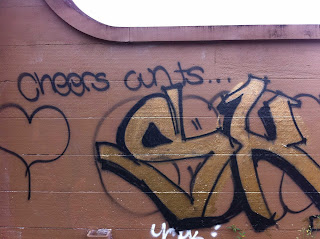 I'm not sure who is responsible for cleaning this up - it's a bureaucratic Bermuda Triangle. This used to be a railway bridge, but it's been converted into a cycle/pedestrian bridge. The question is - who owns it now? Is it still a RailCorp asset, or is it now with the RTA, or the Ministry of Transport, or what? I'm going to have to write a letter to get to the bottom of this one if my website inquiry gets nowhere. 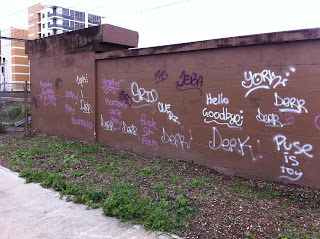 This is the underside of the railway bridge - there is a new railway bridge next to the old one, and this is definitely a RailCorp problem. Issues like this can be reported via the CityRail website. There is a railway underpass near one of the stations that I use from time to time - vandals have sprayed paint over all the light fittings, so it's pitch black after dark. That makes it easier for them to vandalise the tunnel or to rob people, so I've finally remembered to report it to CityRail. 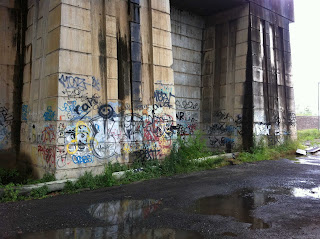 Not long now until I'll have reported 150 vandalised Energy Australia kiosks like this one. 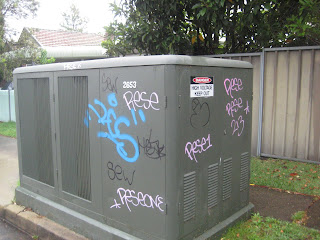 Graffiti in Rydalmere - is it 'artistic' to say that "Fems love big penis"? 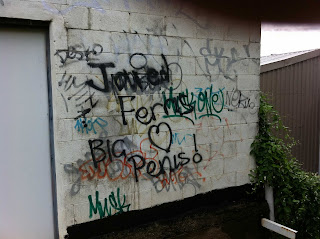 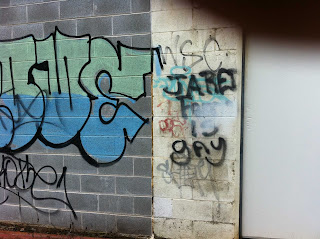 Interesting message on this barrier - "The world is ours". That's a nice thought - now, how about keeping it neat and tidy instead of wandering around damaging and spray painting everything in sight? 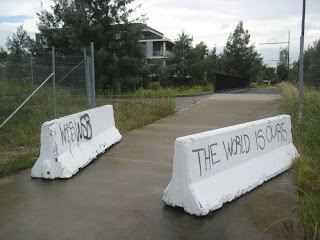 This team of vandals have thoughtfully left their names on the back of the barrier. Amazing how much damage 11 teens with a few spray cans can do. The entire area is littered with their tags - and this is a new housing development that really only opened last year. They've been very busy. 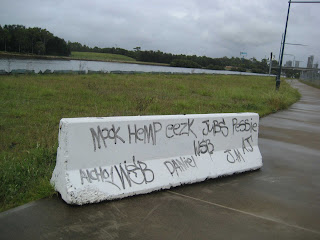 The new walking track along the river has a dozen or so street lights overhead - every single one of them has been smashed. Is it the same group that's done all the tagging? Maybe, maybe not. 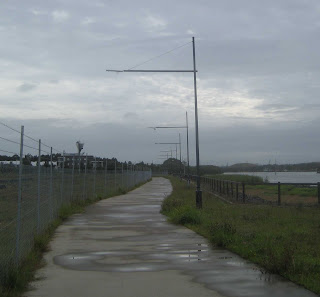 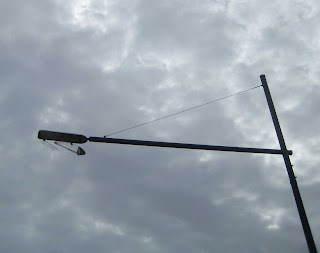 There used to be a plaque on this rock commemorating.... something. I suspect it's been stolen. I've let Council know. 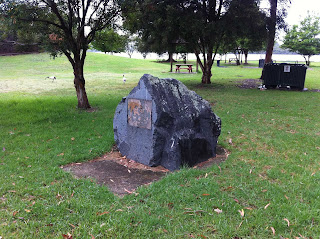 The summer holidays are always a peak time for graffiti, vandalism and malicious damage. I've seen a number of street signs around the place that have been bent partially or fully over - some have been snapped off. That's not the result of being hit by a car - that's teenagers grabbing the pole and pulling it over. I reported the one below to Canada Bay Council via email on Sunday - they fixed it on Monday. That's another couple of hundred bucks that the ratepayers will have to pick up the tab for. 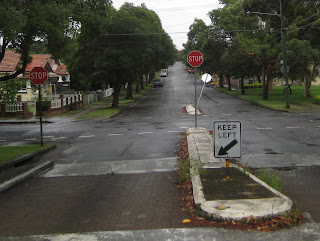 Graffiti on a Sydney Water pumping station. 2116 is the post code for Rydalmere. I've read a bit about gangs putting up tags with their post code, but this is the first one I have seen east of Parramatta. I've reported this via the Sydney Water web site. 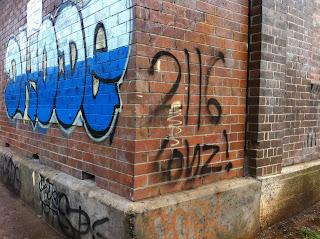 Finally, a problem caused by engineering "vandals". A trench has been dug across the road here between the jetty on the other side of the road and the park behind where I'm standing. When they've filled it in, the crew has either run out of tar, or they've been in a hurry to get home. The surface of the refilled trench is at least an inch below the rest of the road in some places. It's not so bad if you hit that in a car, but it's an almighty crash when you hit it on a bike - and this is one of the busiest bike paths in the inner west. 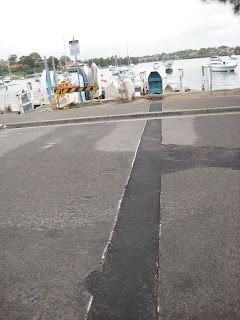 I emailed Leichhardt Council this morning and asked them to put a bit more tar in the trench - they've logged it and passed it over to their maintenance division for action.
Posted by Not Somebody Else's Problem at 4:10 PM 1 comment:

Some of the members or visitors to UTS rowers take an occasional liberty with the foot path, parking right across the path. I almost ran (literally) into this one in December - I'm fed up with it, so I reported this to Ashfield Council. A ranger rang me the next day and said he was going down there to have a chat with management about it. 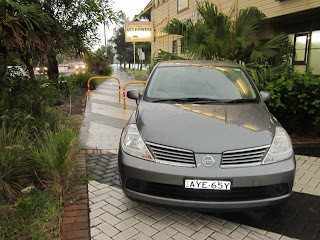 There's been a lot of talk about building bike paths around Sydney of late. The path around the back of Darling Harbour has recently been realigned, widened and painted. Just one problem - they didn't bother to fill in all the enormous holes and cracks in the new route before laying down the paint. I wrote to Clover Moore about this particular one before Christmas, and got a letter back saying it is somebody else's problem - in this case, the Sydney Harbour Foreshore Authority. That's funny - all the media attention regarding bike paths has been directed at Clover Moore. She's been taking all the credit - but doesn't want to take any of the responsibility for the problems. 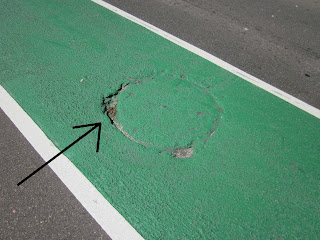 This car is a "serial offender" as far as lack of registration goes. It was left on the road all last year until the rego expired. I reported it a few months after the rego expired, and soon after an orange "we're going to tow you away" sticker appeared on it, it was re-registered. The rego has lapsed again - it expired in November. I've reported it again. Let's see if it goes for good this time. 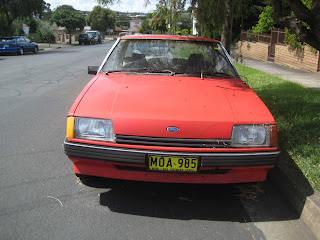 This sign in Lilyfield was bent over to the point where it was going to collect a cyclist sooner or later. I reported it to Leichhardt Council before Christmas, and came back from holidays to find it fixed. 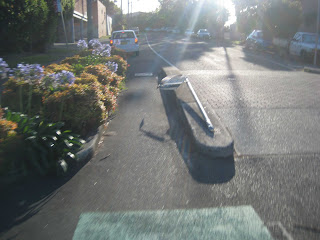 These two Jags have been quietly rusting away in Abbotsford for about 10 years - they were last registered about that long ago. They used to have drop sheets over them - they rotted and finally blew off in a storm late last year. 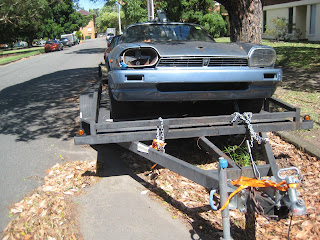 I've reported them to Council - because they are on trailers, I'm not sure about the laws regarding towing them away. We'll see - it will be an interesting test case. 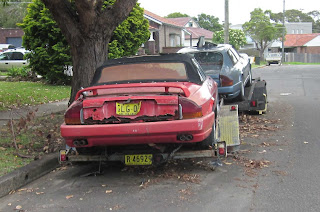 Posted by Not Somebody Else's Problem at 7:33 AM 1 comment: