I know the courts are slow, but this is ridiculous

In April this year, I emailed the people responsible for managing the Downing Centre court house and asked them to replace the flags out the front - they were completely worn out. Faded, torn and tattered. I like seeing the Australian flag flying outside public buildings - but I also want to see that it's flown properly and with respect. Those responsible for the flags at the Downing Centre appeared to have no idea about flag protocol. 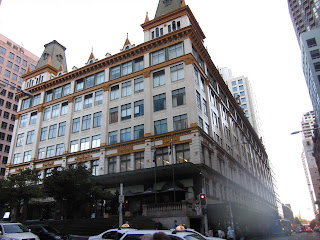 I noticed last week that they've finally raised two new flags.
It's incredible that it's taken them six months to procure two flags. Six months!
Posted by Not Somebody Else's Problem at 6:16 AM 3 comments:

How fifty cents can save the world

Maybe that's just a slight exaggeration. But spending fifty cents on a stamp has helped to keep Sydney harbour clean.
Maritime NSW has installed rubbish traps on a number of canals that drain into the harbour. From time to time - either due to foul weather or foul play - the traps come adrift from their moorings. When that happens, rubbish flows straight into the harbour.
The first photo was taken on 11 October, showing the trap wide open. It had been like this since at least 29 September, when I first noticed it. I wasn't organised enough to report it straight away, although this just goes to show how many other users of the Bay Run have been paying attention to the rubbish traps (or noticing and not caring) - none! 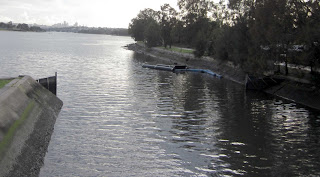 I wrote and posted a very simple letter to NSW Maritime on 11 Oct:

I wrote to you in July 2010 regarding the rubbish trap on Iron Cove Creek having come adrift.

It was fixed shortly afterwards, but it has since become adrift again. 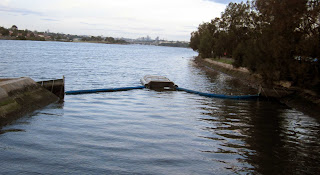 On 14 October, the trap was fixed. Last time I wrote to NSW Maritime about this problem, they fixed the trap within a day. NSW Maritime is a fairly small organisation, so the CEO doesn't need to go through a lot of management layers to get the problem fixed.
When I went past tonight, it was good to see that the trap had already collected a lot of rubbish - not that it's a good thing that a lot of rubbish is drifting down this canal, but it's good to see that at least the trap is grabbing it before it ends up in the harbour.
Posted by Not Somebody Else's Problem at 8:53 PM No comments:

The article below appeared in this week's edition of the Inner West Courier. I pity the poor property owners in parts of Strathfield that are being hammered by vandals - it's always the businesses that get hit the most. 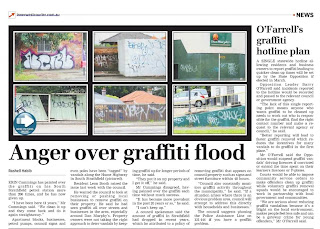 The problem here appears to be a disjointed approach to cleaning up an entire area. Graffiti attracts graffiti, so if a number of property owners don't pull their weight and leave their premises in an appalling state, their neighbours suffer as vandals repeatedly come back to hit the cleaned areas. You need to clean an entire area all at once, and then keep it clean, rather than just hitting single points every now and then.
As for the Liberal Party policy - I like the idea of a centralised hotline for cleaning up graffiti. I've spent months wading through bureaucratic thickets trying to find out which agency or department is responsible for cleaning up certain areas - sometimes without result. Public servants love to pass the buck to someone else - a graffiti hotline will eliminate the pain of having to contact multiple agencies before you finally find someone that will take responsibility and action.
As for taking away the driving licences of vandals - I'd handover vandal's cars to people who have had their property vandalised and let the victims spray paint them as much as they like. Let vandals feel what it is like to have their property rights abused - that might change their attitude towards graffiti.
Posted by Not Somebody Else's Problem at 9:20 AM No comments:

“Residents in suburbs with high reports of graffiti are doing the right thing in alerting us to the problem so our crews can remove the graffiti quickly.
“We’ve found that the quicker we remove graffiti from our equipment the more of a deterrent it is to other vandals.
“Graffiti vandalism is not only a blight on neighbourhoods but it’s a safety risk and most importantly, it’s a crime.
“That’s why we’ve doubled our efforts and appealed to the community to report graffiti to help us keep the network clean and safe.”

The table below is from the press release. Between 2008 and April 2010, there were 194 graffiti reports in Canada Bay. About 100 of those reports were from me, so it's nice to know there are others out there lodging reports. I've noticed that over the last two years, Energy Australia's turn around time has improved dramatically. They now sometimes remove graffiti only a few days after its been reported - which is great to see. 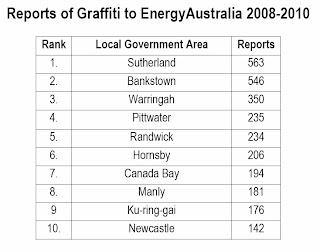 Posted by Not Somebody Else's Problem at 1:06 PM No comments:

How Green is the electorate really?

Balmain is supposed to be one of the greenest areas in Australia. Leichhardt Council is dominated by Greens. The state seat may go Green at the next election.
The Bay Run sits right in the middle of this Green Utopia. If Greens like to exercise like everyone else, 10% of the people who walk or run around the Bay must vote Green.
All of them walk past this rubbish trap when doing a lap of The Bay. This rubbish trap keeps an enormous amount of litter out of the harbour. It is a Very Good Thing. However, it's completel useless when it comes adrift from its moorings - like it has in this photo. 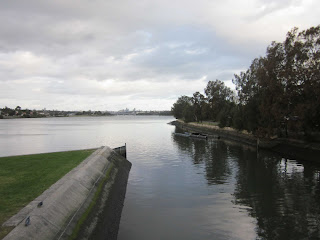 Whenever this trap comes adrift, I report it to Maritime NSW. They usually come out and fix it pretty quickly. Although this area is awash with Greens, how come none of them ever, ever bother to report it? Why are they happy to walk past it, watching rubbish drift into the harbour, without feeling the urge to do something about it?
Greens - all talk, no action.
Posted by Not Somebody Else's Problem at 10:09 PM No comments:

It's not a car - just a humorous amendment to a sign. 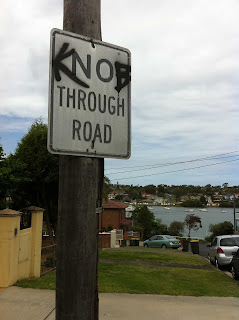 This vehicle didn't have any plates on it, and the rego expired back in April. 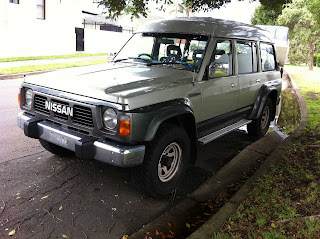 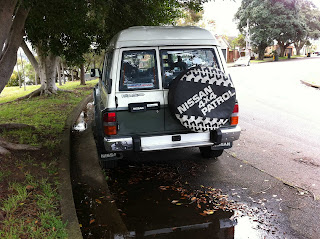 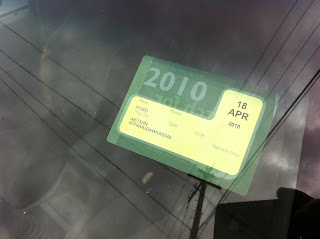 The rego on this one expired back in August. 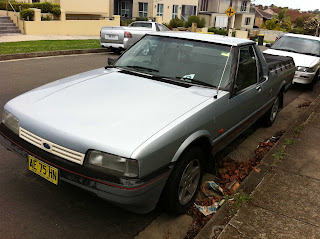 I emailed all these photos to Council last week (except the "knob" photo) - they're usually pretty quick when it comes to getting rid of abandoned cars.
Posted by Not Somebody Else's Problem at 10:01 PM 1 comment:

Three for the price of one

I dropped Ashfield Council a line this week to let them know that one of their bus shelters in Haberfield had been vandalised.
About an hour later, one of their staff rang me to ask which one exactly I had been talking about - they had been to the street in question, checked all the bus shelters and found that three had been vandalised. Three for the price of one.
Nice work Ashfield - they were onto it quickly and without any fuss.
Posted by Not Somebody Else's Problem at 9:56 PM No comments:

CPTED means "Crime Prevention Through Environmental Design". In other words, don't make things easy for crooks.
A classis CPTED strategy for reducing graffiti is to put plants in front of walls that are easy to vandalise. This road side noise wall is a classic example - the RTA has planted all along the side of it facing the houses, and although the wall stretches for several hundred metres, this spot here is the only one with graffiti on it. The creepers and bushes do a great job of discouraging vandals. (I've written to the RTA and suggested that they extend the trellising to cover this spot so that creepers will eventually cover it over). 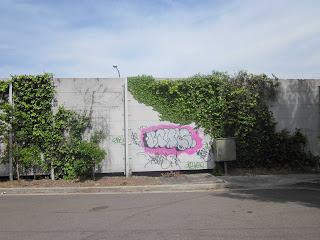 The rest of the wall looks like this - green, pleasant and clean. 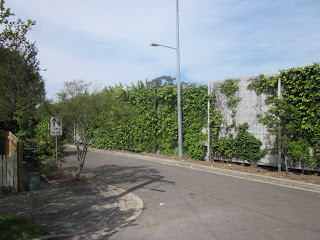 It's not so easy to use this strategy where there's not enough sunlight to encourage plant growth. When that happens, you end up with "art work" like this. 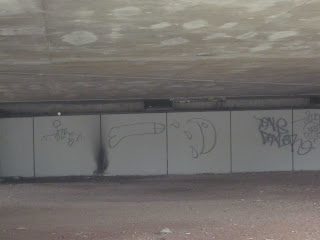 Posted by Not Somebody Else's Problem at 9:19 PM 1 comment: