I reported this abandoned car to Leichhardt Council last week. When I went past on Tuesday, the car had gained an orange sticker on the windscreen which tells the owner that the Council intends to get rid of the car within 30 days. 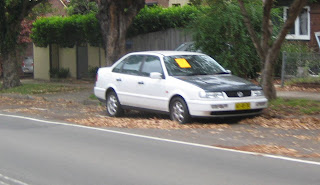 A day later, the car was gone.
That was quick work. One email. Gooooooorn!
Posted by Not Somebody Else's Problem at 8:52 PM 1 comment: Links to this post

Telstra partly clean up their act

For a long time, the most heavily vandalised site in Five Dock has been the Telstra exchange. It's been an eyesore for as long as I have lived here, and Telstra has been consistent in their resistance to doing anything about it. If a building is vandalised, Telstra's own internal policies say that the graffiti should be painted out once a year - but this site has not been cleaned since at least May 2008, when I first contacted Telstra and asked them to do something about it.
Imagine my amazement when I drove past it earlier this week and found that the front wall had received a coat of white paint. 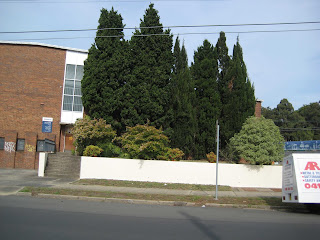 It's only a single coat of thin paint, and at close range the graffiti is still visible under the paint, but it's a start. They haven't done anything about the graffiti on the building itself - they've only removed perhaps 1/3 of what needs removing. But the most egregious part is gone.
I hope we don't have to wait another 18 months for them to tackle the next bit of graffiti on the building.
It is of course possible that Telstra had nothing to do with it, and either Council or someone else got sick of it and painted the wall themselves.
The stupidity of just painting the wall and leaving graffiti elsewhere is that the remaining graffiti acts like a bit, fat tempting target to vandals. It is the equivalent of a "kick me" sign.
Posted by Not Somebody Else's Problem at 7:49 PM No comments: Links to this post

It's been a while since I've spotted an abandoned car around any of my usual haunts. Found this one today on Lilyfield Rd. The rego expired back in June, one tyre is almost flat, the windscreen is broken and it's looking very unloved. 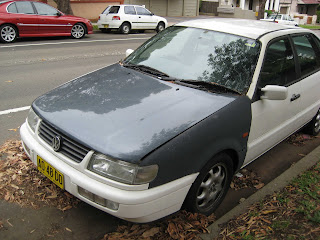 I always take a photo of the rego sticker and email it to the council concerned - that way, they can be sure that it is worth following up on the abandoned car report. If they can see that the car is long out of rego, it means they can take immediate action to start the process of getting rid of it. 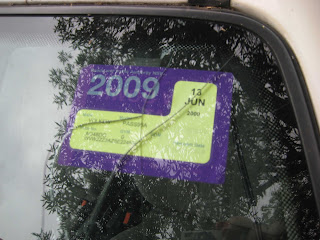 My compadre has pointed me at this fascinating report by the Department of Justice on the results of some Council anti-graffiti demonstration projects that were carried out in 2007-2008.
How typical of government that a report on projects that appear to have wrapped up in 2008 is finally released almost at the end of 2009!
It's fascinating because in all of its 29 pages, I am unable to find any conclusions as to what works and what doesn't. I was expecting to find a precise at the front which would summarise the outcomes of the demonstration projects, but that was not to be.
After wading through the report, my conclusion is that rapid removal of graffiti generally works, particularly if undertaken in conjunction with design changes that harden the target.
There. 29 pages condensed into two lines.
The challenge of course is putting those two things into action - rapid removal and target hardening. That requires a lot of basic grunt work on the ground, rather than sitting around in air conditioned offices writing reports.
Posted by Not Somebody Else's Problem at 7:41 AM No comments: Links to this post

Why am I not surprised?


During the search warrant at 2.45pm yesterday, police allegedly located 756 cans (40 boxes) of spray paint of various colours, 91 marker pens, tools, a circular saw and other construction items in a garden shed in the backyard.


"After the break in where items belonging to the construction company were stolen, police in the Blue Mountains area noted there was more graffiti on public and private property,” said North West Metropolitan Region Commander, Assistant Commissioner Denis Clifford.


I have long wondered whether there is a link between graffiti and more serious crime. One story like this does not prove that graffiti is just the tip of the crime iceberg for all vandals, but it at least shows that for some criminals, graffiti is just part of their portfolio of criminal activities.
Posted by Not Somebody Else's Problem at 11:09 PM No comments: Links to this post

The latest government proposal to crack down on vandalism draws some more letters to the SMH:

Art of the matter: is graffiti vandalism?

Kay Orchison (Letters, November 10) has a strange understanding of our system of government and law if she believes an elected legislator, in proposing legislation, is ''interfering with the legal system''. I don't necessarily agree with Nathan Rees's legislation on graffiti sentencing, but I certainly defend his right to propose it. Kay possibly thinks that function is the preserve of judges. Not yet it isn't.


I am a Sydney bus driver. Alex Dudley (Letters, November 9) wants us to ''get some perspective'' and believes graffiti vandals are angst-ridden and misunderstood. Don't ascribe any justification to this mindless, premeditated, malicious defacement of public and private property, to be expunged at taxpayers' and owners' cost.

They do it simply because they can, egged on by their peers, expressing nothing worthwhile and with little chance of being held to account for the anger and distress caused. We provide clean, modern, vehicles with qualified and courteous drivers and to find evidence of graffiti vandals' ''work'' makes me sick. It's like having them spit in your face.

Still, not many train or bus windows are ''etched'' in Coolatai, I guess. How's that for perspective?


I'm with John McLean on this one. Vandals are not running around spraying things with paint because they are putting up art - they are doing it because they can, and because they have no self control, no perception as to how their activities affect others, and no sense of right or wrong. They are doing it for the rush and for the notoriety that it brings amongst their peers.
Posted by Not Somebody Else's Problem at 8:59 AM No comments: Links to this post

I predicted yesterday that the SMH would lead the charge against juveniles being locked up under proposed anti-graffiti legislation.


I was thinking that they'd get upset when the first case went to trial.

Writing on the wall for enforcer Rees

So Nathan Rees thinks he can buy votes by punishing children with prison sentences (''Rees cops spray over graffiti laws'', November 9). As ugly and annoying as graffiti tags are, I would rather live with every flat surface on the planet covered in them than see a single child imprisoned for six months.

Mr Rees ought to look at how zero tolerance policies have fared in the US, and how many lives have been ruined by them. He is interfering with the legal system, threatening our families and undermining his party's credibility (what little it retains).

Mr Rees said: ''I'm putting graffiti vandals on notice - we have you in our sights and the community, police and business are right behind us.'' All the people I have spoken to are part of the community. None of us agree that imprisoning children is an answer to anything.

Police and business may well be behind Mr Rees. ''The community'' is not - or if we are, he ought to watch his back.

I heartily agree with the war on young people. Let's leave graffiti to the more mature political activists - I want messages, not mindless decoration. Ah yes, I still have fond memories of the ''Out Menzies!'' exhortations along the Sydney rail network in the 1950s.

I would have thought that the message was pretty simple - if you don't want to get locked up, don't mess with property that doesn't belong to you. Don't break the law.


Posted by Not Somebody Else's Problem at 8:18 PM No comments: Links to this post

Will the government have the intestinal fortitude to follow through?

According to the news today, the state government is going to get really tough on graffiti vandals.


CHILDREN carrying spray-paint cans without a legitimate reason could face six months in jail under a revolutionary graffiti crackdown by the State Government.

It's all very well passing that sort of legislation. It's another matter entirely to put it into practice. I will bet that when the first juvenile is charged and put away under this new legislation, the SMH will be at the forefront of the attack on the government for locking up juveniles.


It's very rare that all those ducks line up. Somewhere along the line, one or more of these groups bottles it, and vandals walk free to carry on their merry trade.


I am not arguing for or against jail time - I am simply saying that it is easy to talk tough; it's much harder to turn tough words into tough actions.


An interesting development is the "clean up" day, where community groups will be issued chemicals and cleaning equipment. I wonder if they'll let us clean the Telstra exchange building in Five Dock? I hope so. The clean up day will be worth it if the only thing we do around here is remove the endless build up of graffiti from the local Telstra exchanges.
Posted by Not Somebody Else's Problem at 8:05 PM No comments: Links to this post