Last Tuesday, I tried to contact NSW Maritime to let them know that one of their rubbish traps was busted and no longer collecting rubbish. As their call centre closes at 4.30pm, and there appears to be no option to leave a message, I tried using a form on their web site to lodge a report.
One week later, the trap is still broken. I had another look at the contact page at NSW Maritime to see who to call. It told me to call 131256 - but when I did so, the options that the computerised voice gave me didn't match what was listed on the website. I had no idea what option is select, so I just took a punt.
At least the bloke that I spoke to seemed to have some idea of what I was talking about. We'll see how long it takes them to hook the boom back up to the trap. I wonder what happened to my first attempt at contact? Have the gremlins been attacking the Maritime computer network as well?
Posted by Not Somebody Else's Problem at 9:02 AM 4 comments: Links to this post

Maritime NSW operates a number of rubbish collection traps where creeks flow into the harbour - there are two in our area. One of them has had a bad habit of late of coming adrift from one of its moorings - whether this is a result of wear and tear or foul play, I don't know. 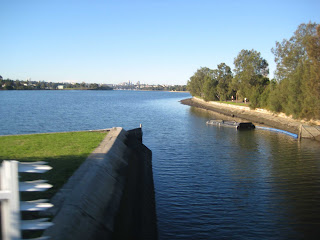 Without the trap in place, great wads of rubbish will drift down the creek and into the harbour - not a nice thing to happen. The amount of rubbish that backs up at this point after heavy rain has to be seen to be believed. Without the traps, our harbour foreshores would be a real mess.
The Maritime call centre closes at 4.30pm, so I sent them an email this afternoon to let them know that this needs fixing.
Posted by Not Somebody Else's Problem at 5:00 PM No comments: Links to this post

First, the good news - Canada Bay Council has removed all the graffiti from the playground at Livvi's Place. 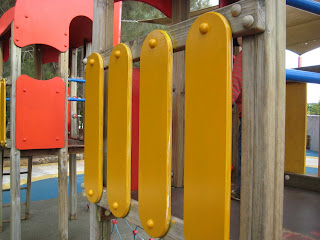 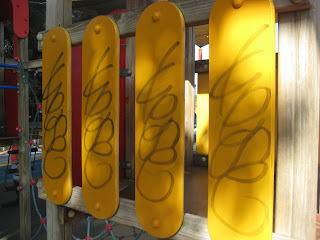 This is the Downing Centre courthouse in the Sydney CBD - a very impressive and ornate building (it used to be a department store). The flags were at half mast recently following the death of Jeff Shaw. And what a tatty and battered pair of flags they were. I emailed the court administrators, and they've replied that the flags are going to be replaced. I doubt they are taken down much, as the seam on one of them has split away from the flag and wrapped around the pole, meaning that it can't fly freely. If the flags were being taken down each night, I'm sure whoever was tasked with that duty would have noticed the poor state of the flags. 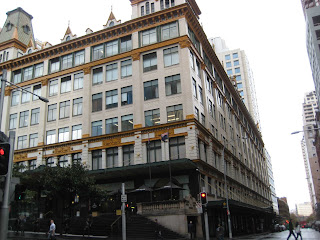 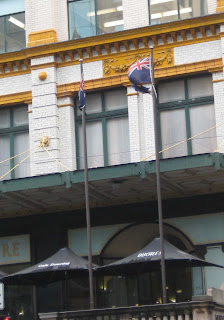 The rain is coming down in torrents this week, and there are flash floods being reported in some areas of Sydney. It doesn't help if the drainage system isn't maintained when it isn't raining, resulting in the drains utterly failing to remove water when it does rain. 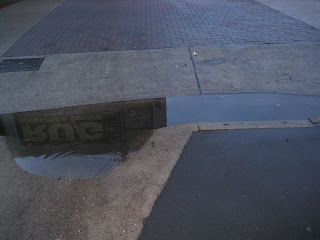 This drain in Leichhardt has been like this for at least 4 years - I finally got around to reporting it to Leichhardt Council this week. Yes, I have been bone idle, ignoring it and hoping it would go away.
It's probably choked with leaves and litter. I was told years ago that in Perth, the councils rent those big sucking machines, and spent autumn cleaning out the drains before the rains come. That sort of pro-active, common sense forward thinking maintenance doesn't seem to happen in Sydney. Given the mindset of most of the Leichhardt councillors, they are probably more worried this week about events off Gaza than problems in their own backyard. 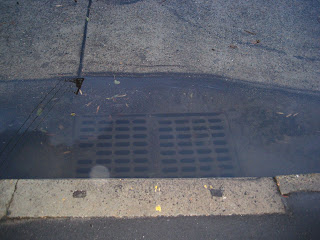 Closer to home, we have a silly piece of Council infrastructure. I took this photo standing on the bike path of the Bay Run. It shows a bike ramp or pram ramp leading onto the road, then across to a cut out in the road dividing concrete island (for bikes to pass through) and then linking up with the bike path on the other side. 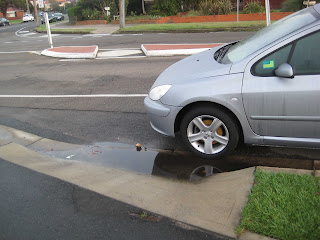 Unfortunately, the way Council (or its contractor) has painted the lines on the road implies that it is OK to park across this bike ramp - which is a silly thing to do. However, the owner of this car has done just that - and as they are advertising the car for sale, it has sat here now (blocking the ramp) for about two weeks.
I've emailed Council and asked them to repaint the lines to remove the impression that this is a parking zone. You know it makes sense.
Posted by Not Somebody Else's Problem at 4:13 PM 3 comments: Links to this post