We have some conflicting points of view when it comes to advertising posters on road and rail bridges.

These sites under the bridges etc are legal sites. It's leased out by rail Corp for advertising.

On the other hand, I got the following feedback from the RTA (Corporate Communications):


Regarding your enquiry of 23 March 2010, the RTA does not allow posters to be displayed on over/under passes on bridges so any application to do so would be declined.

I'm going to write to RailCorp and see what they have to say. I'd be surprised if they had a different answer to the RTA. RailCorp does have legal sites - most of them are on stations facing the platforms, and are large billboards. I worked for the CityRail Marketing Manager at one stage, and he was in charge of the advertising contract. Back then, it was billboards only. They might have changed their policy - I'll soon find out.

As for abandoned cars, the Suzuki that I reported a week or two ago has gone. I was coming home last week and I spotted a bloke jump starting it from another car. The next day, it was gone. I don't care where it is now - so long as we don't have unregistered cars out on the street.

I gave the iPhone Snap Send Solve application its first test last week - it was quick and easy to use and I got a response back from Leichhardt Council the next day (I reported a fresh batch of pot holes down near La Montage in Lilyfield).
Posted by Not Somebody Else's Problem at 2:35 PM 2 comments: Links to this post

It will be interesting to see what sort of response I get to this letter:

Prosecution of illegal bill posters in the Leichhardt area

I am writing in regard to the proliferation of illegal bill posters on public property in the Leichhardt area, and the prosecution by Council of those responsible.

As you may be aware, this is covered by the Protection of the Environment Operations Act. Bill posting is considered illegal because it is a form of pollution. Councils can issue fines directly to those responsible for producing the bill poster.

Bill posters can degrade and become litter. The proliferation of posters can produce a significant amount of litter, particularly where the posters are made of inferior paper products, are not protected from the elements and are left to degrade. The litter is often deposited upon land and in some instances is conveyed to street gutters where it can further go on to pollute waters. Putting up posters is environmental vandalism.

I refer in particular to the following two sites:

Posters are frequently put up illegally at both sites, and more importantly, the posters come down quite often and end up as piles of litter on the footpath and on the verge. Either they are not sticking to the walls particularly well, or passing pedestrians are tearing them down.

I am requesting that Council prosecute those responsible for putting up these posters – including the organisations and companies who have paid to have them put up. I am also requesting that Council either undertakes regular clean-ups at these sites (and others like them in the Leichhardt area), or arranges for the responsible government agency to do so (eg, RTA and/or RailCorp).

-----------------
I didn't write all that myself - I lifted some of the text from Newcastle Council and some from the City of Sydney. If that's what other councils are doing and saying, then there should be no reason for Leichhardt not to follow suit.
Posted by Not Somebody Else's Problem at 8:58 AM 5 comments: Links to this post

A very handy iPhone app called Snap Send Solve is now available. I've installed it, but haven't actually used it in the field yet. It won't be long now before I give it a go.
The City of Sydney has set up an arts program for brightening up the city's laneways. I've been keeping an eye on the art in Dungate Lane - it's a big improvement, but some idiot vandals have been ripping bits of it down or spray painting over the top of it. Here's a bit more art being glued to the wall. 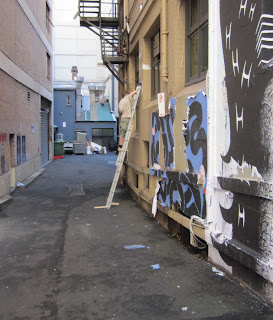 Another abandoned car - the rego on this one ran out in January, and it's been sitting here for months. Interestingly enough, I found out recently that the Mayor lives in this area - I wonder if he's ever noticed it, and bothered to report it? It's not like this particular suburb is very large - it's about 3 streets long and 4 streets wide, and this is on the main road leading out of this small suburb. I guess he has other fish to fry... 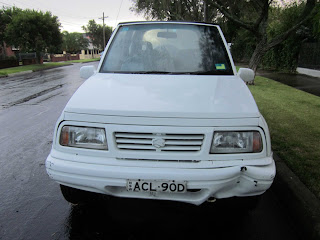 The Greens were at it again in the closing week of the election - this time, they put up a banner on the pedestrian bridge over the City West Link. It promptly came adrift on a windy day, and was flapping across the path. 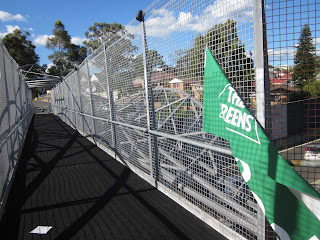 This came within a whisker of blowing into my bike wheel as I went past - which would have brought me down. That would have been rather ironic - Green banner injures cyclist. I would have thought that the Greens would put up a banner where it would appeal to cyclists (more their target audience) rather than car drivers on the road below - but what would I know? I wrote to the RTA and asked them whether this banner was authorised - you have to get permission from the RTA and book a spot on these bridges if you want to put up a banner like this. 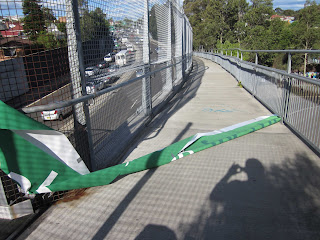 After it blew down, the Greens tied it back up. However, they put it in a position where it blocked visibility around the corner of the bridge. When I came past the next day, I couldn't see around the corner, and almost slammed into a pedestrian coming up the path. More irony - Greens nearly cause cyclist and pedestrian to crash. I don't believe they were thinking very hard when they put this banner up.

The engineers at Leichhardt Council weren't thinking very hard when they built this bike path extension around the Bay. I wrote to both the Council and Mayor before construction started and asked them to ensure that there was sufficient drainage - the previous extension is prone to flooding as well. They read my second letter (the Mayor never bothered to respond), but utterly failed to do anything about it. The new extension floods even faster than the previous extension! 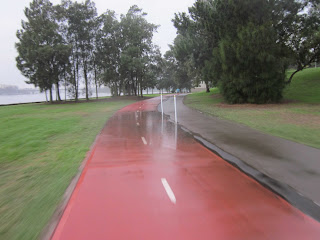 Here's the Greens posters in a rail underpass. Thanks to a comment on my last post, it's clear that these are illegal and can attract a hefty fine. I'm going to write to Leichhardt Council and ask them to take action - it will be interesting to see if they do anything, given that the Mayor is a Green and he might yet become the new MP for this area. Will they take action against their own, or will they allow them to get away with breaking the law? 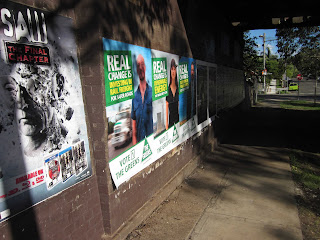 Some more views of the vandalised art works in Dungate Lane in the city. 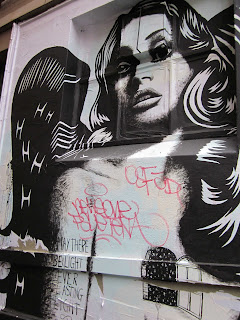 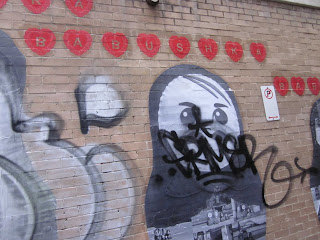 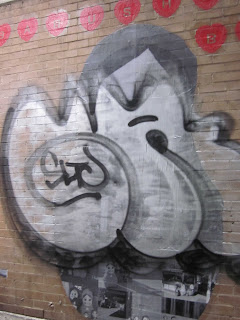 Posted by Not Somebody Else's Problem at 7:55 AM No comments: Links to this post