RailCorp are doing work on the old goods line through Lilyfield, turning it into a light rail extension. The area around one of their worksites has been thoroughly trashed by vandals, and it appears that they broke into the worksite over the weekend and pushed the site's portable toilets over. I wrote to RailCorp about the rubbish within and around the site last week - when I went past yesterday, the area was much cleaner, and I noticed three full bin liners at the gate waiting to be picked up. It's a pity that I had to ask RailCorp to clean up their own site - someone from management should have been visiting regularly, and if they were, they might have noticed the sea of McDonalds bags, drink bottles, coffee cups etc inside and outside the fence. 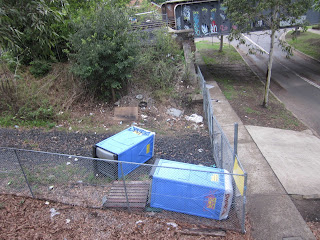 The walls under the railway bridge are a favourite spot for the illegal posting of posters. Last week, posters for the Greens went up. By yesterday, half of them had been torn down or fallen down - along with several other non-political posters. The rubbish from the posters was all over the footpath, and had started washing into the street. 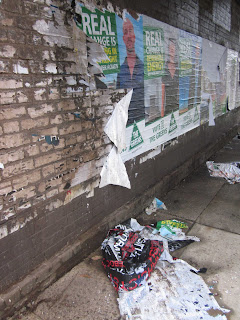 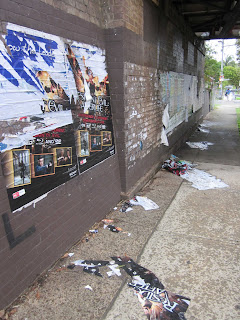 It's a similar story at one of the overbridges along the City West Link.
I've left a comment on Jamie Parker's website, which ironically states "Help me improve Balmain, Leichhardt, Glebe and Haberfield":
Yes, I'd love you to improve the Lilyfield area. Recently, Greens posters have been illegally put up on RailCorp and RTA bridges. Most of these posters are now lying on the footpath or in the gutter as great wads of rubbish. How about going back and cleaning up after yourself, and stop using public assets for your advertising. Stop treating our environment as a rubbish tip.
The state election is this weekend. The most common form of political advertising is coreflutes nailed onto power poles. What I've noticed from recent elections is that by the weekend after the election, Labor and the Liberals will have taken most of them down. There's always the odd one that is missed, but they manage to get 95%+ very quickly. Sometimes, most of them come down on the Sunday after the election.
I'll be keeping an eye on the Greens coreflutes to see if they bother to take them down as rapidly and comprehensively. After the 2007 federal election, I had to write to them two months after the election to ask them to clean up their rubbish. They're good at putting it up, and hopeless at taking it down.
Posted by Not Somebody Else's Problem at 6:14 AM

According to the following article they could be fined $1500 for each poster.

And they should be. And to think these people are wanting to be legislators.

The corporates are just as bad. I am seeing multinational companies use this form of illegal advertising. I even saw the Qld Premiers Flood Appeal use these illegal posters.

Please keep up your campaign.