Back on 31 July, I reported three vandalised structures that are within 50 metres of each other - an RTA traffic light utility box, a letter box, and an Energy Australia kiosk. That was a Thursday.
By the following Monday, the letter box was cleaned. Australia Post got the gold medal. There was one working day between reporting and cleaning.
It took Energy Australia one more day to clean their kiosk - two working days.
The RTA were a bit slower off the mark. Here is that same utility box on Monday 17 August - still not cleaned. 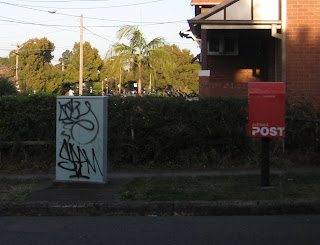 Here it is on Thursday 20 August - clean at last. A turnaround time of 3 weeks. 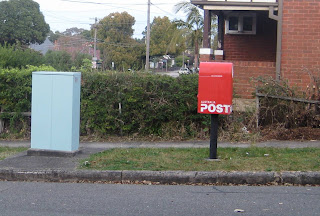 Just think how much better things could be if these companies pooled their resources and had a single cleaner doing the cleanup. They could all be cleaned at lower cost to the taxpayer, and hopefully at the speed of the fastest organisation.
(Although knowing how government works, the combined entity would operate at the speed of the slowest company, and it would cost four times as much to get anything done).
Posted by Not Somebody Else's Problem at 10:53 AM