Spotting a vandal in the act

I like to go around the Bay Run on a regular basis (which is why I have been chasing the RTA to paint over graffiti on the Iron Cove Bridge, which forms part of the Run), and one of the sites that I go past is 91 Canal Rd, home of Legs on the Wall theatre, owned by Arts NSW and managed by PRP Values and Consultants.
After my post last week about the fence at 91 Canal Rd, I was contacted by Evan, a Property Manager with PRP.  We had a good chat on the phone about graffiti at this site, and the issues that he has to deal with in keeping it clean.  I have tried to deal with a number of Real Estate Agents and Property Managers over the last 4 months, and Evan is the only one that I have spoken to.  I have had an email from one other agency, and the remainder have hidden under a rock.
I have some good news and bad news for Evan this morning.  As I was going past 91 Canal Rd on Sunday at around 3pm, I spotted a bloke walking into the site in a suspicious manner.  He was looking around in a way that telegraphed that he was up to no good.  I kept my eye on him, and probably gave away the fact that I was watching him, so he quickly sprayed a tag on a roller door and legged it up an alleyway and out of my sight.  The shot below is a still from 12 seconds of fairly useless video that I shot of the vandal making his escape.  The red circle on the left is his tag, the red circle on the right is the vandal running away after he realised that I was watching him through the fence. 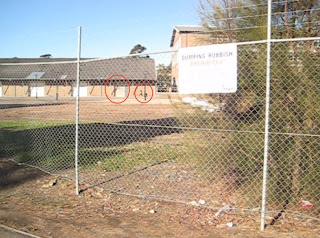 The map below shows the site in question.  The yellow "103 Field Workshop" is now an arts space.  I took the video from the path on the left of it that runs under the City West Link. 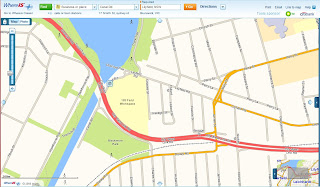 Plotting our movements on an aerial photo, I was travelling along the path on the left at "A".  I spotted the vandal at the x marked "B".  Once he realised he was being watched, instead of backtracking out the gate that he came in, he took off up the lane marked with an arrow.  I turned around and went right around the entire block, and went up and down each street on the right to see if I could spot him. 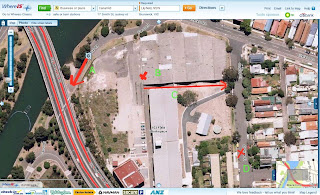 It was at that point that I realised I had been so intent on trying to capture him on video, I really didn't get a good look at him.  When I got home and had a look at the video on my PC, I realised that I had in fact gone past him in Charles St, which is on the eastern side of this block.  He was wearing a hooded top that was black on the top half and white on the bottom half, black track suit pants and he appeared to be in his late teens.  Since he was on foot, I guess he lived somewhere close by.
Now all I have to do is see if I can report it to the Police.
The vandal appears to have walked in through the front gate, which was open as there were trucks coming in and out delivering what appeared to be theatrical materials.  A few vans and cars, presumably containing staff, went in and out whilst I was in the area.  He simply strolled in at a point when all the staff were inside the sheds loading or unloading vehicles, which left the car park unmonitored.
There's not much you can do about that, except to be extremely aware of how opportunistic these people can be.  It was broad daylight, there were many people walking around the Bay just a short distance away, there were people working on site not 50 metres away.  Yet he brazenly walked in, did his business and departed, and everyone would have been none the wiser if I hadn't seen him acting strangely as I went past.
One thing that struck me is that you can spot guilt 100 metres away.  His body language gave him away before he'd even pulled out his can of spray paint and left his mark.
Posted by Not Somebody Else's Problem at 8:47 AM

Labels: Legs on the wall, Lilyfield, PRP Valuers and Consultants