I got a comment the other day that said that bus stops like this are the responsibility of the local Council, not the bus companies.  Well, I don't really care who takes care of it, and someone has - this had graffiti smack bang in the middle of it two weeks ago. 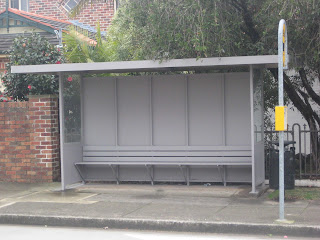 I haven't had a formal response from Sydney Buses yet, but it's only been two weeks, and I am a patient fellow.
My concern is not who owns the bus stops and signs and streetside furniture.  My concern is that Sydney Buses seems to have a very relaxed attitude to keeping an eye on the state and condition of bus stops, and reporting it to whomever is responsible for fixing them.
As an occasional bus commuter, I don't give two hoots about who owns the seat at the bus stop that I travel from.  Sydney Buses can shout as loudly as they like that it is not their problem, but the seat has their name on it, and it's at a spot where buses stop, so in my mind, it is associated with them.  Furthermore, because of that association, it reflects badly on my perception of their service and competence.  When I see a seat at a bus stop that is so badly trashed that I don't want to risk sitting on it, I have to wonder about the state of the bus that I'll be traveling on, the level of care that the driver will show and even the punctuality and reliability of the service.
If Sydney Buses care about their image, then they'll care about ensuring that bus stops are in good condition, even if it is not their responsibility to take care of them.
Posted by Not Somebody Else's Problem at 10:06 PM


I am always searching online for tips that can benefit me. Thanks!